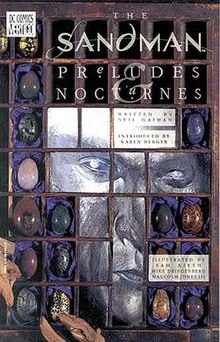 Neil Gaiman’s ascendance to global writing superstar has been quite an organic process in a literary world that often seems characterised by overnight success stories, PR manufacturing, and the dominance of supermarket shelf-fillers. He really doesn’t fit any of those categories – instead, his position seems (to me at least) to be largely comprised of the rewards of years of hard work, and Sandman seems to be as good a place to start charting this journey.

Gaiman, these days, is quite a tricky writer to categorise, which could make him an unpopular proposition for publishers – he may sit within the fantasy genre, but I’m sure that authors envy him the luxury of being able to pick and choose audiences and subject matter seemingly at will. From YA roots (before YA really existed) to the adult market, the television, back to children’s fiction, to some wonderfully unconventional picture books, to riffing on the Jungle Book by including the undead, all the while continuing to write more weighty and ambitious novels for adults. But read his books and you actually realise that he’s keeping the same voice throughout. ‘Wolves in the Walls’ and ‘Coraline’ are Neil Gaiman doing his Neil Gaiman thing – they’re not talking down to children, they’re imparting the same themes and messages as ‘American Gods’, just without the horror, sex and violence.

The Sandman graphic novels were – I think most people would agree – Gaiman’s early break into the big-time, and we’re probably key to exactly how he’s been able to morph his way through every facet of the writing and publishing world. No one still really knows how to categorise comics (are they  for adults? Yes! Are they for kids? Yes!) Pitch anything to a book publisher and it MUST be attached to a specific age group (or perhaps to the modern genre of ‘coffee-table picture book for anyone’), but Neil Gaiman just writes, and it seemed that nobody in the publishing world knew exactly who he was writing for. But that’s cult followings for you. He wrote Sandman. Everyone read it. Jonathan Ross and Lenny Henry raved about it. It won awards. Word got around – “That Neil Gaiman’s a good writer. He writes odd stuff, but loads of people buy it.”

As an over-simplification, Sandman came about during an era in the late 80s and early 90s when American comics giants began poaching UK talent. Stale superheroes were revived by the likes of Alan Moore, Grant Morrison and Neil Gaiman who were able to give a new perspective on the genre. DC comics launched the ‘Vertigo’ line for mature readers, and ‘Sandman’ was born. Preludes and Nocturnes was an opening gambit for a longer series – the equivalent of a TV pilot. Neil wrote the 7 comics in the collection as a self-contained saga that deliberately tidied up after itself with no cliff hanger (should the series prove unpopular and be shelved) whilst leaving enough loose ends and openings should it be allowed to continue. Indeed, Neil knew exactly where the ‘epic’ Sandman would go (observant readers will notice that he gives away the punchline early on in ’24 hours’), and fortunately the opening comics proved popular enough to allow this to happen.

Sandman begins as a unconventional conventional horror comic. Past volume one it becomes a very unconventional horror comic, before evolving into a character-driven blend of fantasy, horror and Neil Gaiman, but to begin with it plays to some established rules whilst sneakily breaking them when it thinks no one’s looking too closely. Each chapter takes a sub-genre – classic English ghost story, contemporary English horror, classic American horror, etc, showing a versatility that would become Gaiman’s trademark, while also hinting at possible problems that would occur when translating to mediums like television – Gaiman notes in an interview how potential directors for ‘Neverwhere’ commented that the script jumped seemingly at random between genres and conventions, and perhaps television still isn’t the best place for Gaiman’s work, considering the choppy adaptations of ‘American Gods’ and ‘Good Omens’.

Volume 1 is very much the writer and artists finding their voices – penciller Sam Keith abandons the series before the end, but we also see Dave McKean’s partnership with Gaiman continue, with incredible cover designs that demonstrated at the time that this comic was something quite special. It’s not a series that plays it safe at all – from Dave breaking with convention by (gosh!) not featuring the title character on every front cover (yes, this was a big deal), to Neil’s horrific treatment of his characters in the chapter ’24 Horus’ – it still feels weighted down by the presence of characters from elsewhere in the DC comics universe, and although some imported characters feel at home in the Sandman Universe, Neil at least felt comfortable in jettisoning the superheroes by volume 2, to eventually be replaced by characters from different sources.

Novels like ‘Nancy Boys’ and ‘American Gods’ follow the trend that Neil adopted years back with Sandman of appropriating mythological and literary characters into his comics. He wasn’t the only writer to do this – the aforementioned Grant Morrison and Alan Moore are notorious for this practice, with Morrison incorporating pop-culture references into works such as ‘The Invisibles’ left right and centre, probably for the purposes of Chaos Magick, whilst Moore has famously subjected a large portion of the English literature back catalogue – from Prospero to Harry Potter –  to a quite remarkable catalogue of ‘experiences’ and abuses. Mike Mignola’s ‘Hellboy’ comics are a masterclass for anyone wanting to learn about obscure European myths and folklore.

Cultural appropriation is itself a thorny issue these days, and not one that I want to fully explore here. Gaiman, though, I would say is regarded as having a knack for treating characters with respect, and even though his version of Thor does little in his few short appearances but make rude jokes about VD and rubbing his hammer to make it bigger (mythologically correct fact, apparently), readers from Nordic countries apparently commented at the time how they preferred Gaiman’s comic book spin to Marvel’s. Gaiman eventually wrote his book of Norse myths, and it’s worth remembering that the groundwork was set out in these 90s horror comics. Sandman Volume 1, meanwhile, raids the Judeo-Christian back catalogue, and so we meet  Cain and Abel (Abel describing himself as “From the first story. The victim”), and Eve, all of whom remain in the series as secondary characters. Oh, and there’s series favourite Satan, of course. 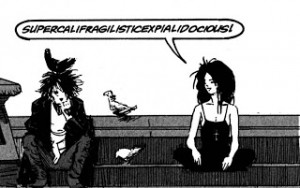 Preludes and Nocturnes closes with the chapter ‘The Sound of her Wings’, a fan favourite, and the first chapter where Gaiman seems to feel comfortable enough to let his own creations flourish on their own. It introduces his version of Death – the polar opposite of Terry Pratchet’s grim reaper, but just as popular with readers, here portrayed as a chirpy goth girl who quotes Mary Poppins. This chapter encapsulates a lot of how I feel about the whole volume – it’s moody, messy and unpolished, but it’s a singular work by a storyteller who knows exactly where they’re taking their story and their characters. We’re shown a world and people who are familiar, but skewed in the most unusual way, forcing us to take in a new perspective. To an adult reader, this first Sandman book (and the final chapter especially) can seem a little like the moody outpourings of a teenager prone to overthinking things, but then I think that’s partly the point- Preludes and Nocturnes is one of those rite of passage comic books that’s essential reading for moody teenagers (young and old) everywhere.

Anyway, rambling over. This has been as much a blog about Neil Gaiman’s work as anything else – does his early writing still hold up today? And do these graphic novels still deserve a place in your YA collection?