Shaun Tan is one of those incredible picture book authors whom I can’t quite puzzle out just how they broke into mainstream publishing – but I’m eternally grateful that someone took a chance on this modern day master of surrealism. It’s commonly said that Maurice Sendak’s ‘Where the Wild Things Are’ probably wouldn’t get picked up by any publisher these days, but it’s nice to see artists like Shaun Tan bucking the trend in an industry mired in such identikit ‘meh’, that 90% of the product just makes me want to go back to bed and have a bowl of cornflakes. 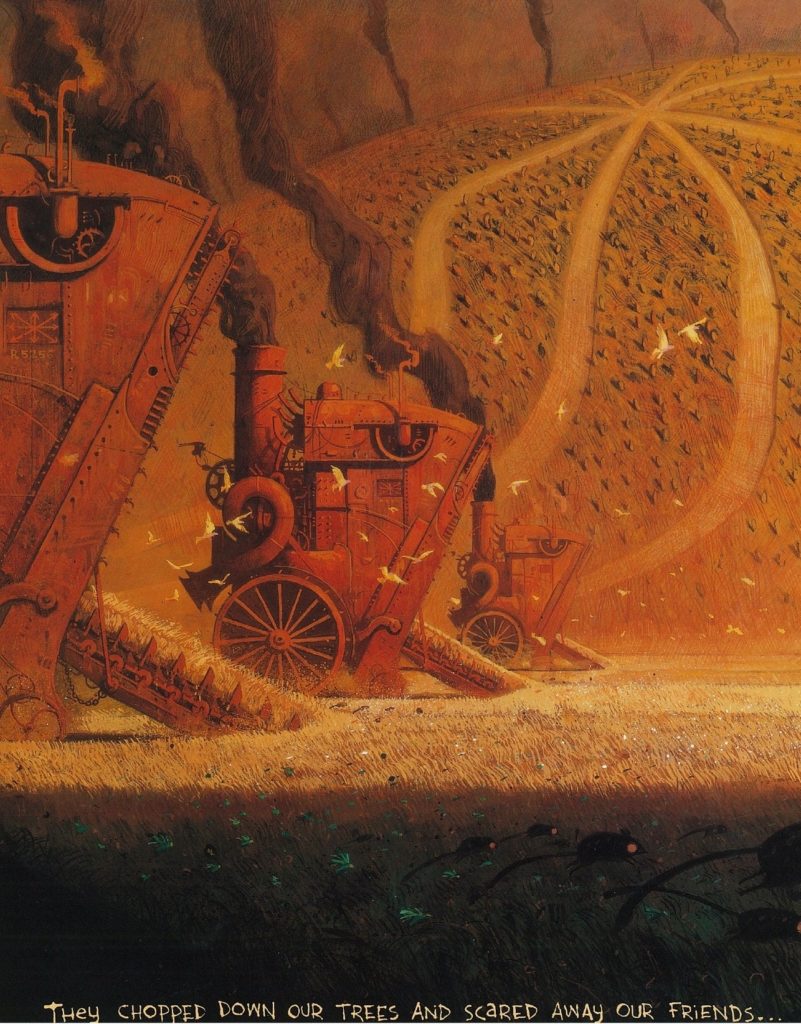 My first encounter with his work was the often overlooked ‘The Rabbits’, written by James Marsden. Originating in and about Australia, but not overtly so, if the reader misses the subtle visual cues to the marsupial native animals or hasn’t heard of the rabbit-proof fence. This is a powerful indictment of colonial rule and empire-building. Tan’s art style turns what are usually cuddly balls of fluff into imposing figures, overrunning the landscape already overshadowed by their monolithic ships. This is partly a story of industrial and military might vs the natural world, and the minimal text is complemented by some heart breaking art and composition choices. Tan’s artwork inverts our perspective on the story, visual devices that can be seen as drafts for his later work, in particular ‘The Arrival’. It can be an uncomfortable book to read, especially when we realise that we – the readers – are the rabbits (or at least their descendants). The artwork puts a mirror up in front of us to show us how we look like to outsiders. Tan dissects and disassembles our clothing, our buildings and our technology into its component parts and bolts them back together in monstrous ways – we recognise our weapons, our animals and our cities, but now understand how they must have looked to the people whose land and lives we destroyed – alien and horrific. 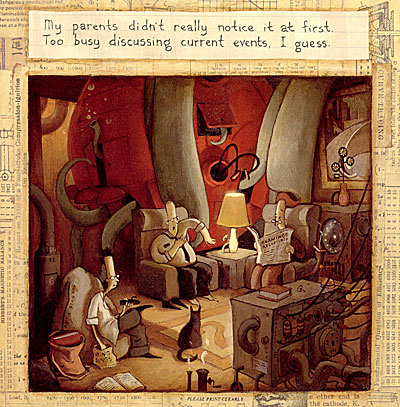 Tan’s picture books share this theme – putting us in the place of someone lost or out of place. ‘The Lost Thing’ spells this out for us in it’s title. Inside, I wonder if it deliberately uses motifs established in The Rabbits – the walls around the beach keeping in the city that could be constructed from bits of household appliances. Honestly, I feel that there are a lot of mixed metaphors here, and based on his later work, it feels like a sketchbook, mapping out ideas for ‘The Red Tree’ or ‘The Arrival’. I feel that ‘The Lost Thing’ is occasionally a prisoner to it’s text, with the descriptions interrupting the visuals, and it’s noticeable that Tan’s later picture books reduce or abandon text altogether. On the other hand, ‘The Lost Thing’ would probably feel quite at home (no pun intended) in ‘Tales from Outer Suburbia’ with minimal artwork.

‘The Red Tree’ is another overlooked gem of a picture book, though admittedly a potentially difficult read and difficult to know who to recommend it to. It’s a far cry from conventional picture books that deal with feelings, and I feel that it needs an adult perspective to fully appreciate. 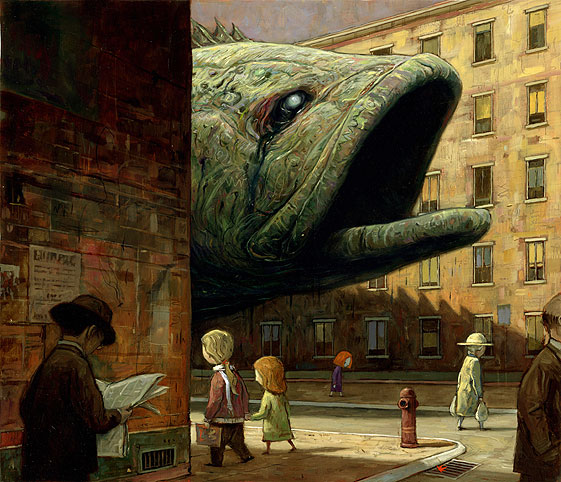 ‘The Red Tree’ is about being lost, depressed, and seemingly alone in – as Tan puts it – a world without form or reason. Almost every page will be frighteningly familiar to its readers, being beautifully rendered metaphors or same reconstructed environments we live our daily lives in (like in The Rabbits, Tan throws our world back at us from the perspective of someone for whom its a badly fitting garment). Tan’s painting has evolved further, with richer colours and less reliance on line work. There’s a beautiful tactile quality to the pages, and a use of light that is impossible elsewhere in an industry seemingly obsessed with minimalism and the trappings of product design. It was no surprise to find that his roots were in theatre design. I’ve started to see this book as an illustrated poem rather than a picture book. The lack of text is deceptive and this really is one for older readers who are struggling with their place in the world. 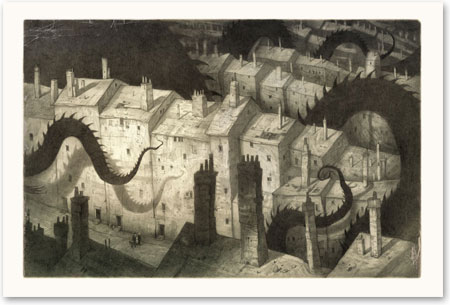 ‘The Arrival’ will likely remain as Tan’s most celebrated work, and quite rightly so. The ultra-detailed pencil work and stark realism of the characters is at odds with his previous (much of his later) work, though themes and ideas translate across. The story carries on the themes of being lost and displaced and alone in a place where everything is both familiar and strange. Tan abandons text altogether this time, allowing visual storytelling and metaphor to carry the story and exposition, and the realism of the artwork is stepped up accordingly, in particular in regards to the characters – these are real people inhabiting a world that is at once dreamlike and visceral. We meet our protagonist in his home country and his house in a familiar street that is at once anywhere and nowhere. Instead of clumsily describing his reasons for leaving and the danger he and his family faces, Tan simply draws sinister dragon-like tails weaving between the houses and lets us make our own interpretations. 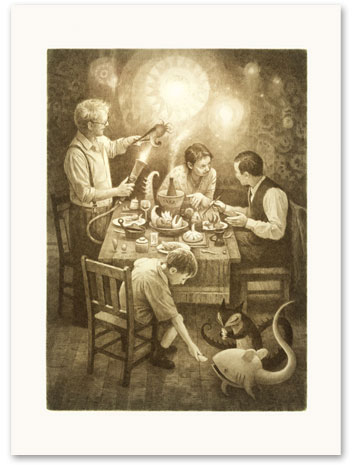 As the story continues, lack of dialogue highlights the language barriers that our characters face, and emphasises the universal language of gestures, drawings, sharing of food and drink, music and simply cooperating over the rules of a game. The story moves from someone being alone and confused, to being about people being brought together. Every reader will translate Tan’s art in different ways, and in the classroom it’s a book for discussing, exploring, interpreting and reflecting that doesn’t restrict by pinning the themes of immigration and refugees onto a specific place or time.

Feel free to discuss these or other books by Shaun Tan – including any recommendations for use in the classroom. Other notable (and wonderful) books include ‘Tales from Outer Suburbia’, ‘Tales from the Inner City’, ‘Cicada’ and ‘Rules of Summer’.