Christmas is a time of unashamed nostalgia – whether it’s digging out the favourite decorations, or celebrating Victorian-era child abuse via TV adverts for a supermarket. With this in mind, I feel no guilt in waxing lyrical about my two favourite Christmas picture books of all time.

First up is Father Christmas by Raymond Briggs. Father Christmas is a work of utter genius. In many ways it’s the inverse of so many of Briggs’ other stories, in which a child – for a short while – comes into contact with a fantastical being, be it a polar bear, a snowman, a gruff tiny man or a man selling puddles. After a day, night or just a few minutes, this character disappears from the child’s life forever and both child and reader is left wondering things like “Where did they come from?” and “Where are they now?”, and both child and reader are left changed forever by the experience. 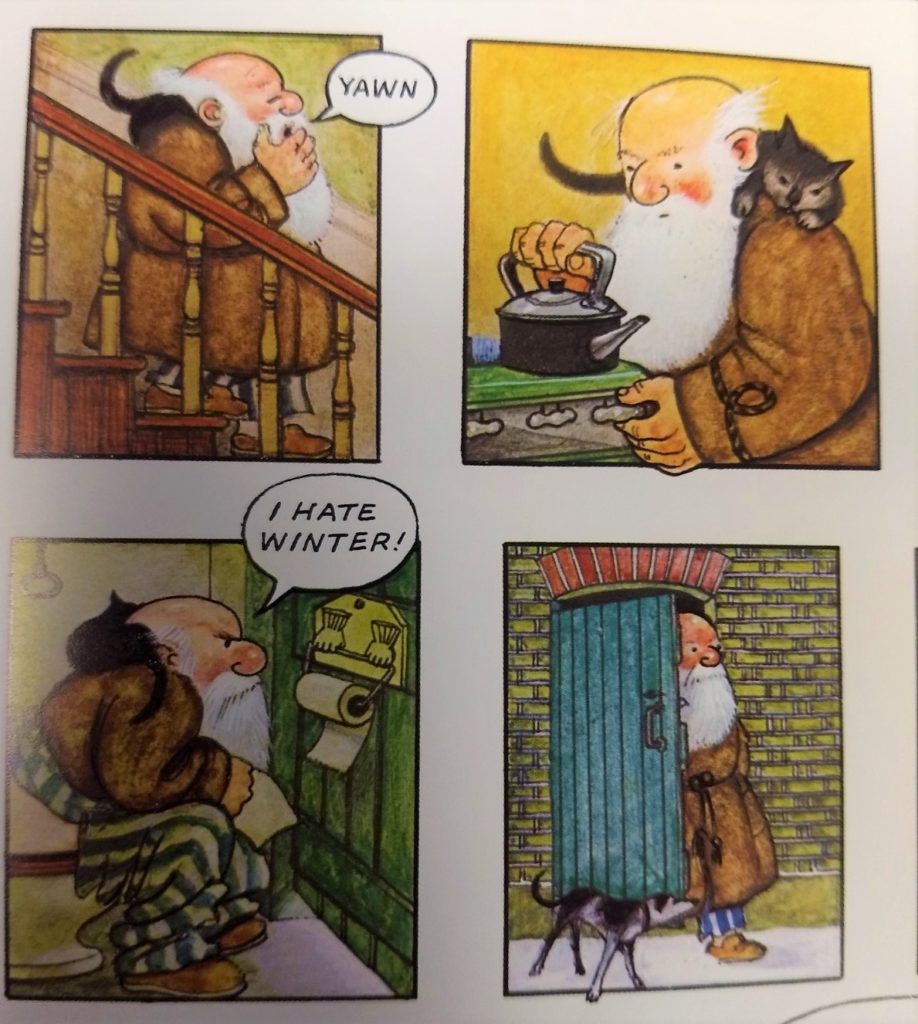 In “Father Christmas”, rather like “Fungus the Bogeyman”, the reader sees the story from the point of view of the visiting, magical, character. This could have been another Briggs book in which Father Christmas – grumpy and overworked – squeezes out of the fireplace to encounter a wide-awake child and the two have adventures together before Santa vanishes again. Instead we’re reading Briggs’ touching tribute to his milkman father, Ernest (himself appearing towards the end of the book), and – like Fungus – Father Christmas is another working class hero, though with more practical and straightforward problems to be grumpy about – the weather, the practicalities of chimneys – rather than Fungus’ philosophising or Ug’s family troubles. We see the hidden side of these fantastic, legendary characters, and we see that they’re not much different from us – they look forward to summer holidays, they don’t like rubbish gifts, and they go to the toilet. 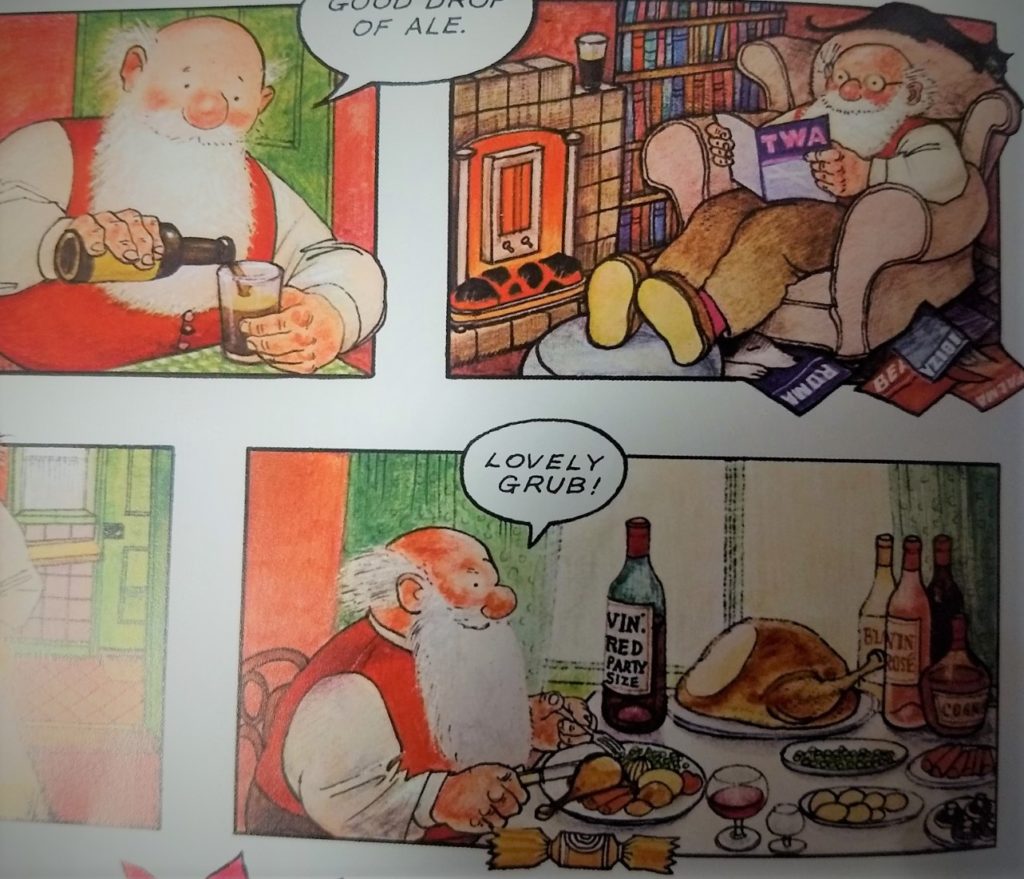 This Father Christmas emphasises the ‘Father’ part – stereotypically, at least, and even though he appears to have no family aside from a cat, dog and his reindeer – the everydad who grumbles about going to work in the morning and grumbles about it some more when he gets home later, but who most certainly loves his job and cares about doing it well. And he’s a great cook, too – I can’t think of another Christmas book that features such an appetising-looking Christmas dinner.

They say that there are three ages to man – firstly you believe in Father Christmas. Then you are Father Christmas. Finally you look like Father Christmas. I’m currently in stage two – working behind the scenes to keep the magic of Christmas alive for the family and moaning about whether it’s really worth all the effort even though I know (all being well) it’ll be great in the end. Briggs is saying that we can all be Father Christmas, and I’m pretty sure he sees a lot of himself as well as his father in the character. Briggs consistently brings this very human touch to his characters – mythical figures like Santa Claus are brought town to Earth with a bump, but they’re made all the more real for this. So much about Christmas these days is packaged away behind a glossy sheen, and sometimes we just need to step back and drop a “Blooming Christmas” every now and again.

I have a rather precious first edition hardback of this book – bought and read to me when I was little – that my daughter has now inherited and that I was very fortunate to have signed by Shirley herself. This is the Christmas picture book that I have the earliest memories of and those memories have stayed with me, mainly because of the wonderful illustrations. 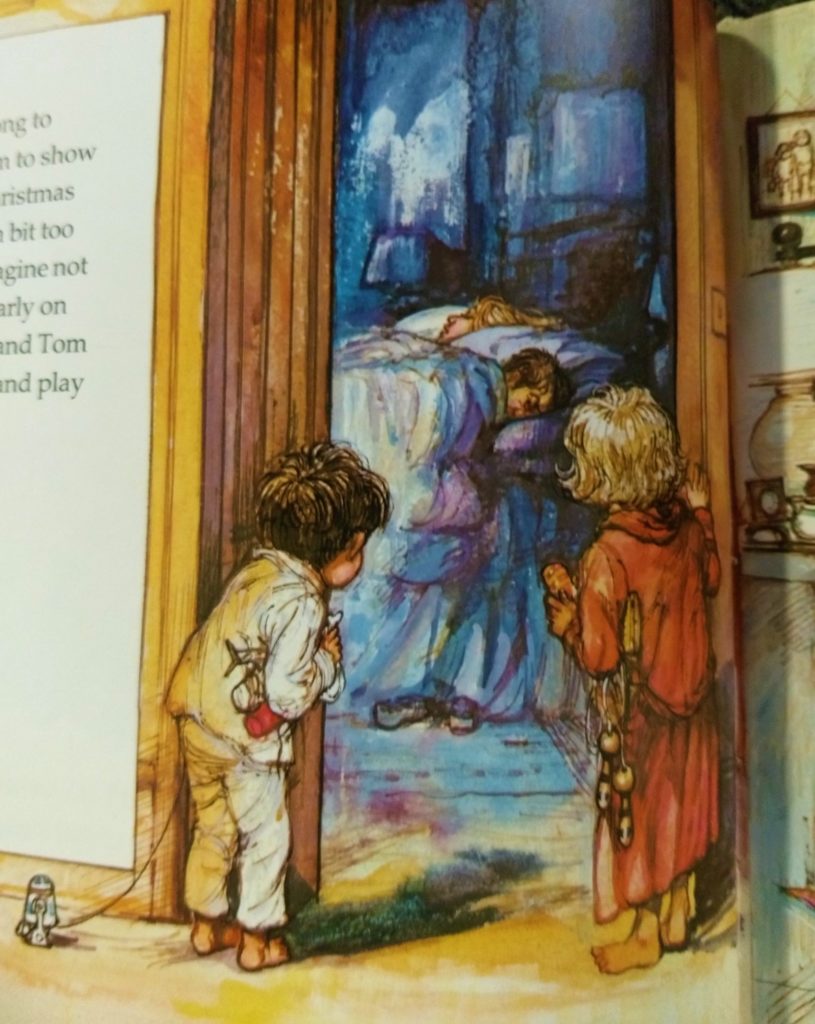 Though children today may find it odd that the tree is being dressed on Christmas Eve, the scenes depicted in the wonderful illustrations will still be familiar to so many. I think everyone will find their own little details to latch onto – Hughes’ observation is her greatest talent and for a boy raised on ‘Star Wars’ my eye was always drawn to Tom’s gift of a pull-along R2-D2 toy, something that will still be familiar to audiences today. Another timeless scene – and probably my favourite illustration in the book – is the bustling London street market. Perhaps it’s a trick of the composition, but the trader hawking the spider puppets (leftover from Hallowe’en?) always stood out to me, and the scene is alive with characters whom you could see in any shopping street today.

Huges’ art has a busy nature that’s often lacking in modern books now that there’s a trend for more minimal designs, and I think that this is a great shame because Christmas is a time where everything can seem too busy, too flashy, filled with so many things. These illustrations are at once cosy and reassuring, and exciting and attention grabbing, and this book will stir up memories from the adults whilst working up a frenzy of excitement from the children listening.

Oh, and you really should play the ‘Heads, bodies and legs’ game. It’s up there with the shape game.